Meeting between the Private and Public Sectors 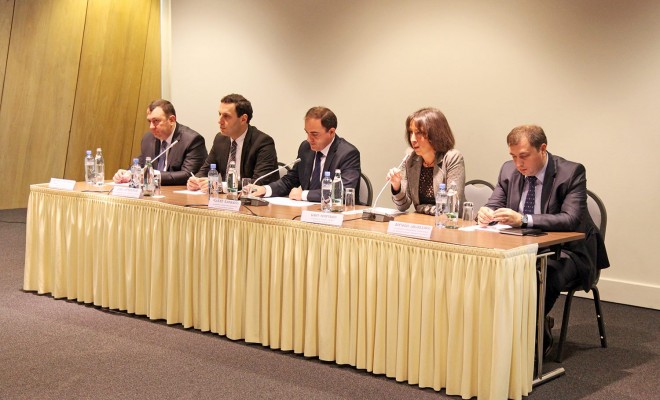 Today the Minister of Regional Development and Infrastructure of Georgia Mr. Davit Narmania met with the representatives of business sector of Georgia. The meeting was also attended by representatives of entities within the jurisdiction of the Ministry; Deputy Executive Director of the Municipal Development Fund of Georgia Mr. Tornike Tortadze was one of them.   The meeting was aimed at introduction  of priorities and main attitudes of the Ministry and its entities in charge to the businessmen.

Davit Narmania’s speech regarded significance of infrastructural development for the economical growth and regional development of the nation, as well as the year 2014 strategy of the Minsitry, its top priorities and planned projects, which will be topical not only for the operating local and international building companies, but also for the representatives of other fields and services.        „It is crucial to  provide to the business sector the information on planned projects and biddings right from the start, in order  to grant them opportunity to prepare and  freely participate in the desired biddings,” – stated Mr. Narmania – „it is also notable that the next year budget is not cut down in comparison with the year 2013 budget, which means that we will be able to hereafter implement numerous large-scale projects. It is precisely this fact that explains the great interest of companies in terms of readiness for the future tenders to be conducted in the more competitive environment.  I have also updated them on the activities of the Fund of regional projects; next year biddings for the projects at the total cost of GEL 200 million will be announced by the Municipalities under the above-mentioned Fund .”
Davit Narmania replied to the numerous  questions of businessmen. They were interested in the details of bidding requirements and specific fields identified for the planned project implementation. New deputies of the Minister – Giorgi Solomonia and Giorgi Amashukeli, Chairmen of the Road Department of Georgia and Solid Waste Management Company of Georgia, top managers of the United Water Supply Company of Georgia and the Municipal Development Fund of Georgia were also present at the meeting.

“The Georgian Chamber of Commerce and Industry is promoting a dialogue between private and public sectors; the present meeting is an illustration of the above.”
- stated Kakha Kokhreidze  - „The input of the Ministry of Regional Development and Infrastructure of Georgia in the economic development of the state is considerable, the next year budget provides for about one billion GEL for infrastructural projects. The business sector should be actively involved in the processes, in order to ensure more effective results.     Various unsound practices, which were present in the past are currently eliminated, methods of approaching and attitudes towards business have changed as well, which especially affects small and medium-scale businesses.   And what is of paramount importance – principles of equality are observed.  This is a new reality, which also implies open relations. Therefore, we deem that such meetings in future will be held on regular basis.”
The meeting of the Minister of Regional Development and Infrastructure of Georgia with the representatives of business sector organized by the Georgian Chamber of Commerce and Industry was held in the Holiday Inn Hotel.