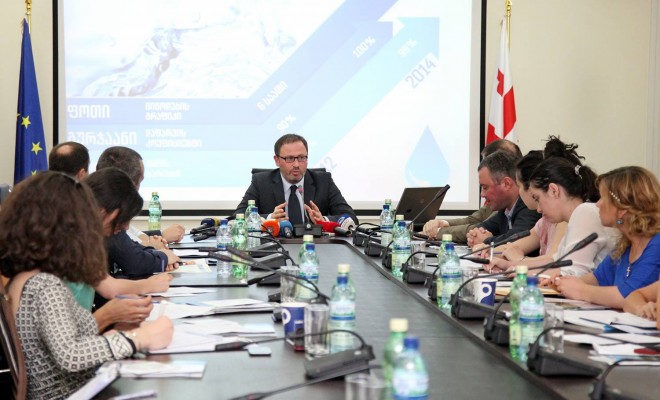 Today, Mr. Elguja Khokrishvili, the minister of Regional Development and Infrastructure (MRDI) in association with the deputy ministers and the heads of companies under state control  presented the public and the media with the report on the work of the last 6 months.

it is worth mentioning that in the first half of 2014, unprecedented investments - GEL305 million were made in public infrastructure, of which:

Over past 6 months,  MRDI launched 209 projects and continues 302 more projects are underway. According to the data of the first half of 2014, 114 projects are completed.

The planned budget for the first 6 months of road construction and rehabilitation totaled GEL230,8 million; of which the MRDI disbursed  GEl217,9 million totaling 94%. It is noteworthy that the cost of the performed road works is up on same period of last year byGEL63,4 million, and same period of 2012 by GEL63,4 million.

With this respect the highway construction projects are of high priority. During the first half of 2014 construction works took place on 131 km road section in total, while 140 km is planned until the year’s end. The scope of the works performed in the 1st and 2nd quarters is 30.2 km more than the same period of the last year, and 54.2km more compared to the similar data of 2012. According to the statistics of the last three years, the cost of the performed works over the past 6 months is up on same period of last year byGEL16,7 million, and same period of 2012 by GEL31.2 million.

Significant progress has been achieved in water supply sector.

This year, the rehabilitation works for water supply system in 14 towns are completed. The similar works have commenced in 28 towns during the last 6 months.

GEL14,068,557 worth of irrigation system rehabilitation in Saltvisi-Tirifoni completed in the first half of 2014. This project enabled resolving the irrigation problems for the population in 39 villages.

In addition, MRDI announced a construction tender for the "University" metro station. As a result of the implementation of the project, Tbilisi population will obtain a metro of the latest standards.

15 residential buildings are under construction for 536 households of the IDPs in Poti and Zugdidi. Construction of 82 outpatients' clinic has started too, of which 40 ones already have been installed.

During the past months of 2014, a tender for designing 25-km road of Roshka-Arkhoti was announced too. In the capital city, construction of shelter for homeless will start soon. Tbilisi-Rustavi motorway constriction has commenced and shore protection works in Anaklia are underway.

As for the existed landfill development, total cost of the works carried out is GEL2 076 200.

Through the financial assistance of the German government (BMZ/KFW), preparatory works of the construction of  Imereti and Kvemo Kartli regional sanitary landfill of international standards commenced.

An important project was launched in Tetnuldi to develop an alpine skiing resort. The project will be completed in 2015 with the total cost of GEL70 million. It is to be noted that 70% of the local population are employed in the project.

During the first half of 2014, the following activities have been conducted with respect to decentralization:

· Mayors and governors are elected via direct elections;

· Relevant legal and normative acts have been adopted for newly established municipalities;

· concept of “continuous training for municipal officials” elaborated by MRDI;

GEL11 423 429 is allocated for the liquidation of the disaster consequences in the 26 municipalities.

One of the priority issues for the MRDI is transparency and accountability to public. In 2014, MRDI was assigned 100 percent score by IDFI Georgia.