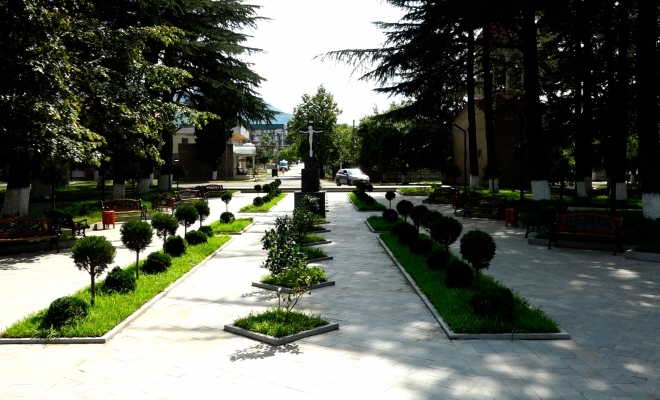 The projects within the “Renovated Regions” Program, undergo implementation in all three municipalities of Guria by the bidding winner company - “Aghmashenebeli-Kutaisi”.

The company has actually accomplished Lanchkhuti central square refurbishment project, under which 12 buildings and the central square, covering 13 000 sq. m, have been renovated. The works included paving of the nearby site, landscaping, and arranging of sidewalks and parking zones. Expanding of the sidewalks are being finalized in Lanchkhuti as of to date. Replacing of the outline of recently arranged sidewalks has been required due to the faulty drainage system to be replaced with the new one, and that works are executed by the company at its own costs.

The works in Ozurgeti too are being finalized. The buildings located on the main square of the town, along with the adjacent site are being rehabilitated.

The first stage works of the program are also being completed in Chokhatauri – 8 buildings on Dumbadze St., as well as the sidewalks, lawns and 3 squares (so called Krimanchuli, Ramishvili and Dumbadze Parks) have been renovated. Concerning refurbishment-reconstruction of the central square of the town, it needs to be noted that the project considers arranging of the central park covering 4 000 sq. m on the square, throughout which spaces designated for recreation and other activities, as well as the parking lots, paths and facilities to serve tourists, will be located. The construction process was commenced in May 2022, although that process was suspended temporarily until the documentation required for arranging of underground utilities are prepared. The work process has been resumed now.

Tentative cost of the projects to be implemented in Guria within that program amounts to GEL 20 million in total, final cost of which will be defined based on actually completed works though. The company has already received GEL 12 million for works actually accomplished to date.