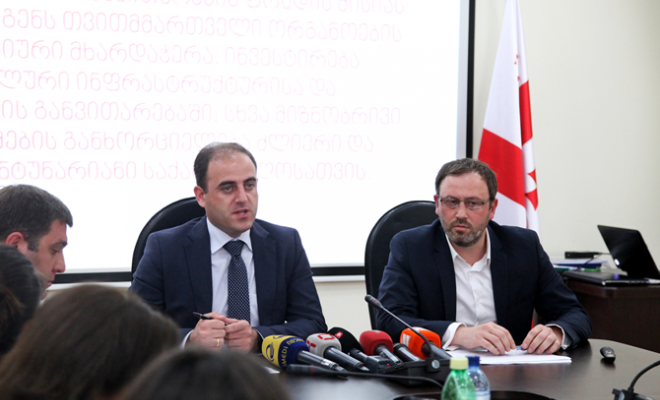 CaptureThe Minister of Regional Development and Infrastructure of Georgia Mr. Davit Narmania and the Executive Director of the Municipal Development Fund of Georgia Mr. Elguja Khokrishvili briefed the media on the results of activities carried out by the MDF in the first half of the year 2013.

The report reveals that as a result of 6-month activities, the MDF has constructed 16 houses and rehabilitated 11 apartment buildings in the different Municipalities of Georgia – Zestaponi, Poti, Zugdidi, Marneuli, Kareli, Gori, Terjola, Kaspi, Mtskheta, Tskaltubo, Kutaisi and Vani, in order to improve living conditions for the IDP-ies. Rehabilitation of the water supply and storm water drainage systems was completed in 12 villages of Georgia. Altogether GEL 9 million was disbursed by the MDF for the mentioned project implementation.

Construction of the Tbilisi-Rustavi Highway

The report states that this year the MDF announced the tender for the project of the first magnitude like Tbilisi-Rustavi Highway Construction Works. The efforts of the new management of the MDF to create a transparaent and more competitive environment for the applicants have borne fruit.  Respectively, the retendering resulted in unprecedented high activity ever recorded and 41 companies purchased bidding documentation.

The endeavor of the MDF was rewarded and all statutory requirements concerning the  Tbilisi-Rustavi Highway Construction Works are met. In particular:   all the shortcomings of the design are eliminated, all of the problems regarding ownership are solved, the construction permit is obtained, and the project cost which was artificially padded is considerably cut-down. It is notable that an agreement was reached with the Asian Development Bank that 100% of people employed for the project will be the local labor-force.

In the first half of the year 2013, along with other important projects, the MDF started large-scale shore protection works.   The works on the river Tskhenistskali in Tsageri Municipality are already completed at the cost of GEL 3 million.  Construction of the  coast-protecting structure in Anaklia with the contract cost of GEL 15 million is initiated.  Currently the bidding procedures are underway for Batumi shoreline protection works.

Rehabilitation of the Water Supply Systems in Various Towns in Georgia

According to the report, the MDF activities were especially dynamic and effective in respect of water supply rehabilitation works. Within a 6–month period, water supply systems were arranged in 17 towns and 5 villages of Georgia, and GEL  12 500 000 was disbursed in total to this effect.

Rehabilitation of Touristic and Cultural Centers

It is noteworthy that within a six month period, the MDF has solved a number of system-invoked problems. In particular, the problematic issues concerning ownership were eliminated for dozens of projects, which were completely ignored by the previous management. Construction permits are obtained for all projects that were also neglected before; the artificially padded project costs are decreased. Numerous substandard projects were adjusted and poorly executed works – remedied. The MDF management has declined the faulty practice of rapid and low-quality construction.  In project implementation, the MDF is aimed at full observance of law and high quality performance, which demonstrates itself in the outcomes of the 6-month operation period.