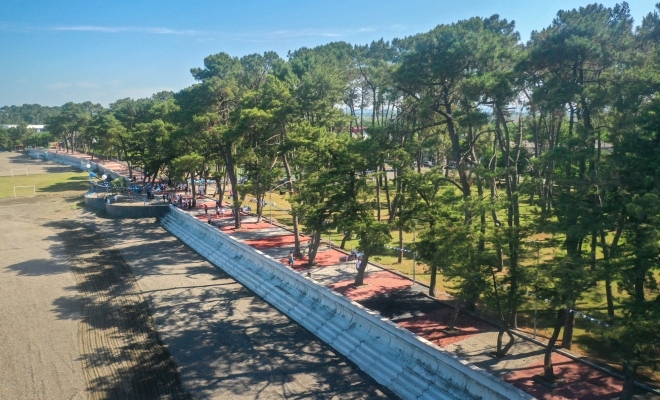 „It is my pleasure to present the completely renovated boulevard to visitors this year, which is an approximately 2 km long section that was subjected to improvement along with coastal protection works.  It is an important endeavor preventing future deterioration of the coastline.  Through this and similar projects we make possible for local businesses to create new spaces, arrange more commercial facilities and generate more income from tourism”  - noted Maya Tskitishvili.

She also stated that from mid September, boulevard rehabilitation works will be initiated in Ureki as well and as early as in May of the following year, visitors will be visiting the renovated beach.

The project was implemented by the Municipal Development Fund of Georgia, cost of boulevard rehabilitation works averaged GEL 9 million. Out of this amount, GEL 2 million was the World Bank funding, the remaining sum was allocated from the state budget.

The project was launched two years ago, however works were delayed, which caused discontent of the local population.   In order to complete major section of the coastline before commencement of summer season,  last year by the  decision of the Minister of Regional Development and Infrastructure of Georgia, the contract with the contractor company was terminated and the State Construction Company undertook to proceed with the works. In several months, boulevard rehabilitation works were partially completed, and this year the coastline was fully finalized and improved.