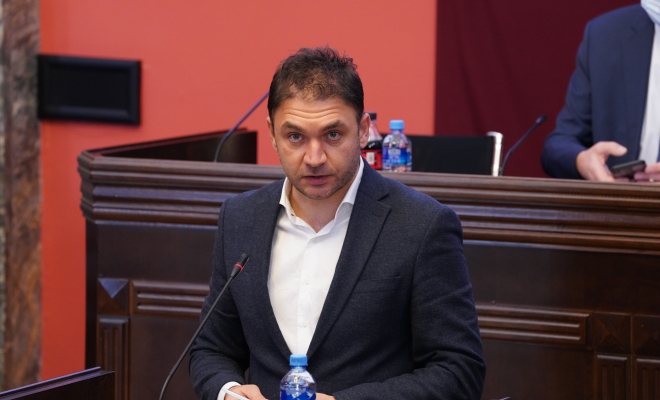 Davit Tabidze, Executive Director of the Municipal Development Fund of the Ministry of Regional Development and Infrastructure of Georgia presented the year 2021 Report at the session of Self-Governance Committee of Parliament of Georgia.

„At the start of the year, the year 2021 budget was equal to GEL   340 million,  therefore budget increase has exceeded 55%, since in course of the year there were some funds made available to the MDF and the current year budget totals GEL 528 million. Actual anticipated implementation by the MDF is to come up to GEL  530 million. Overall, this year alone, the MDF has initiated  101 projects,  177 projects were completed, and 216 are ongoing.  In terms of projects, the MDF has program codes for them and subsequently we will discuss projects in the context of programs.   We have several major programs and I will start with educational infrastructure.  Specifically, speaking of schools, the year 2019-2022 program has picked up steam for quite some time now. The named program commenced with total of GEL 600 million funding.  Respectively, the program involved construction of 67 brand new schools,  52 of  which are already completed and handed over, in order to make them available to pupils.  15 schools are to be completed in 2022. The program provided for full reconstruction-rehabilitation of schools.  In 2020, we commenced reconstruction of fairly big schools, which were in the poorest state - 83 units in all.  50 of them are already completed and accepted by the Ministry of Education, in order for the children to benefit from educational opportunities in new schools. In course of 2022, the above-referred program is to continue with the World Bank support. We are talking about EURO 60 000 000, which is already approved as a loan. Under the named program, design works’ contracts are already executed for rehabilitation of schools in east as well as west Georgia   and we are planning to gradually initiate construction works by the end of 2022.“- stated Executive Director of the Municipal Development Fund of Georgia.

In 2021, the MDF got involved in the new  “Renovated Regions”  Program, which was initiated by the Prime-Minister of Georgia, under the above-mentioned program, infrastructural projects are in fact actively ongoing in all of the municipalities countrywide.