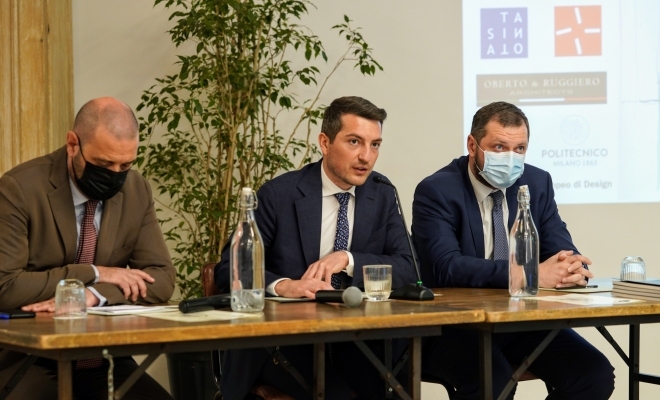 Under the traditional project dedicated to advancement of Italian Architecture and design, with assistance of Italian Trade Agency,  the Embassy of Italy in Georgia has organized a two-day celebration (June 21-22) curtailing  cultural exchanges and displays.

Revolving around the three concepts of Restoration, Innovation and Sustainability, the event launched on Monday through an occasion that involved dignitaries from the two countries, architectural firms from Italy, artist designs and an awards ceremony. While hosting outstanding samples of Italian design, there were discussions regarding these particular principles of art, academy and industry held under the named initiative. A group representing private and public sectors, major part of which was visiting Georgia, took part in this event.

From Georgian side, it was the Municipal Development Fund of Georgia, which presented window of opportunities existing in the country.  The event was attended by Giorgi Shengelia, Executive Director of the Municipal Development Fund, and Beka Toria – Program Manager of the same Fund, who introduced Italian architects to potential projects, subject to design tenders to be announced in the near term.

Among highlights of the launch day was a sculpture by Edoardo Malagigi - who has featured at major international displays including the Venice Biennale and the Abaco Space contemporary art and culture centre in Berlin - created using eco-sustainable approach specifically for the occasion. The exhibit is a larger-size reproduction of the cupola-shaped coffee-maker designed in 1985 by Aldo Rossi for Alessi, an Italian housewares and kitchen utensil company - an item that became an iconic example of Italian design. Titled Cupola, the environmentally friendly sculpture by Malagigi was produced using waste and recycling materials from the Georgian Social Enterprise 'Green Gift'.

On June 22, the Italian Council of Architects, Planners, Landscapers and Conservatives joined their Georgian counterparts in a workshop set up to facilitate networking opportunities. It was possible to attend the event physically, as well as online.  The same National Council organized exhibition of the pieces of “Italian Architects” annual award.

Workshop participants were Italian Restorers Association  (Assorestauro), Institute of European Design  (IED) Polytechnical University of Milan. Italian architectural firms presented their concept of a historical building in Georgia's western province of Imereti. They also discussed an architectural vision for Tskaltubo, a resort town in the province, which is to render the above-referred places more attractive from a touristic point of view.

Those present at the workshop were Architects Association and Architects Union, Tbilisi State Academy of Art and  Mariam Bochorishvili – young Ambassador of Georgia in Italy.

The project aimed at strengthening current contacts between  Italy and Georgia existing in the named field and raising Italian design awareness among Georgian public.