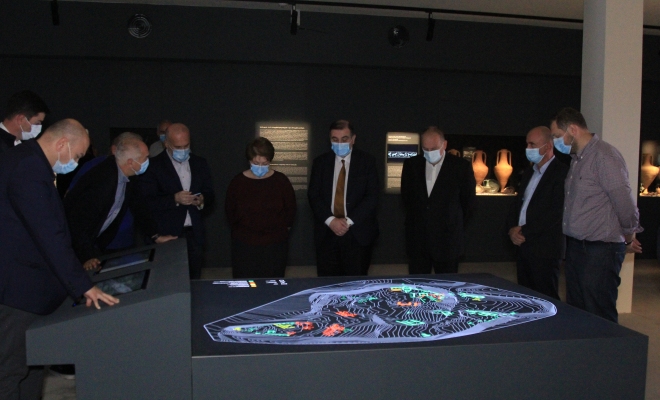 The Museum was opened two days ago and is to host the visitors for two months for free.

Maya Tskitishvili, Mikheil Chkhenkeli and Giorgi Shengelia visited the building of the Museum and viewed the exhibits exposed.

“Along with the Museum exhibits, we do have the lab of international standards here, and experts will be able to conduct all required studies there. In order to study the Vani findings, we had had to take that exhibits abroad, but now this space is becoming interesting not for the visitors only, but for researchers as well. It is very pleasant that the project has tourist, as well as scientific-educational significance that  provides completely new possibilities” – Maya Tskitishvili noted.

The building of international standards houses full time exposition and temporal exhibition space. Along with the scientific lab, there were arranged the depositories, lecture hall, library-video and audio center and public spaces of modern standards at the Museum. Vani Archeological Museum has undergone rehabilitation for the first time since 1985. The project implementation was backed financially by the World Bank (WB) at the project value of GEL 20 million.

By applying of modern technologies and installations, the visitors are already enabled to view the samples of Kolkhetian goldsmith’s work, found out under wealthy graveyards of Vani. The material reflecting associated production technology will also be shown for the first time.

Along with the samples of bronze statutes excavated last year, Vani Museum will exhibit also so called temple inventory for the first time – unique collection of bronze lamps of Hellenistic times.