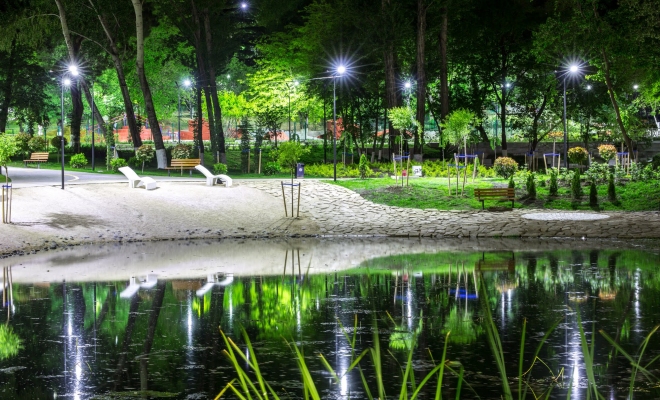 The Municipal Development Fund (MDF) of the Ministry of Regional Development and Infrastructure of Georgia (MRDI) is to finalize rehabilitation of Mziuri Park.

The European Investment Bank (EIB) backs implementation of the project financially and its cost amounts to approximately GEL 7.8 million.

The works envisage renovation of landscaping in the vicinity of Chabua Amirejibi Highway and of the Park thoroughly, damaged as a result of the flood dated June 13th.

The existing mosaics, bridges, stairs were restored and all types of utilities: sewage, potable water, irrigation, fireproof and outdoor lighting systems were restored within rehabilitation of Mziuri Park. Throughout the park there were arranged the bike lanes, benches, bins, pergolas and relevant signs of zoning were installed. In the park was arranged also the artificial lake, and grounds for skateboard and playgrounds children.

Upon finalization of the project the capital city will have one more, thoroughly well-furnished multi-functional recreation zone. The Park is divided into various types of sports, cultural and recreation zones. There were created the new spaces of extra attraction thanks to which “Mziuri” will become much more comfortable not for children and youth only, but for the whole population of the capital. The renovated infrastructure will be adapted for those with disabilities as well as for the parents with the children on strollers.