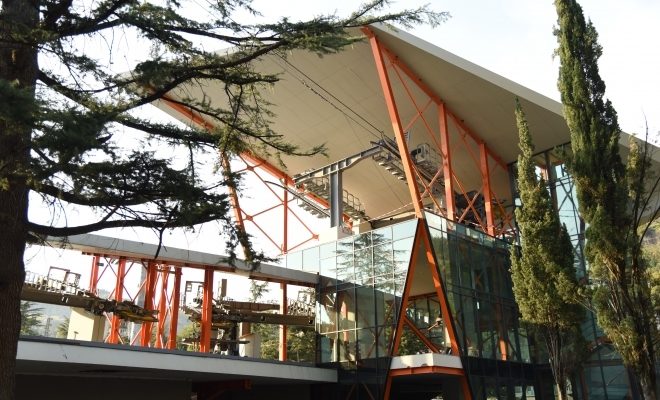 The Municipal Development Fund (MDF) of the Ministry of Regional Development and Infrastructure of Georgia (MRDI) is to complete construction of the cable ways in Chiatura at the end of the current year. The project undergoes implementation with financial support from Georgia and Government of France at the total cost amounting to GEL 40 million.

“Chiatura population have been expecting finalization of this project for a while. The works provide for reconstruction of the cableways and stations. The central station will be completely restored along with its four directions. The cableway of reverse type with the gondolas was supplied by French Company “POMA”. There were some difficulties in the course of the project implementation related to the Contractor as well as the sub-contractor. As of to date, construction of the structural part is almost completed and stretching of the cables are left to be executed only. The French company “Tech-Cable” is already involved in  the referenced process and we do assume that the works will be completed at the end of the current year” – Executive Director of MDF Giorgi Shengelia declared.

The cableway has been one of the main means for movement since the 50-ies of the 20th century over the mountainous-hilly relief of Chiatura. The first passenger cableway throughout the former Soviet Union was built exactly in Chiatura. The available lines and gondolas were not meeting the modern requirements in the 90-ies and were even dangerous for passengers due to long-term operation. Upon finalization of the project the local residents and guests of Chiatura will be enabled to move in a safe and comfortable manner by means of ecologically clean and new passenger cable transport.

New Tenders
September 23, 2020
Request for Expression of Interest – Supervision of the Construction of the urban and tourism infrastructure across three urban area clusters - Kakheti region with Telavi and Gurjaani, Samegrelo-Zemo Svaneti region with Zugdidi and Mestia as the regional hubs
Read more
September 22, 2020
Request for Expression of Interest – National Procurement Specialist
Read more
Other Tenders / Archive