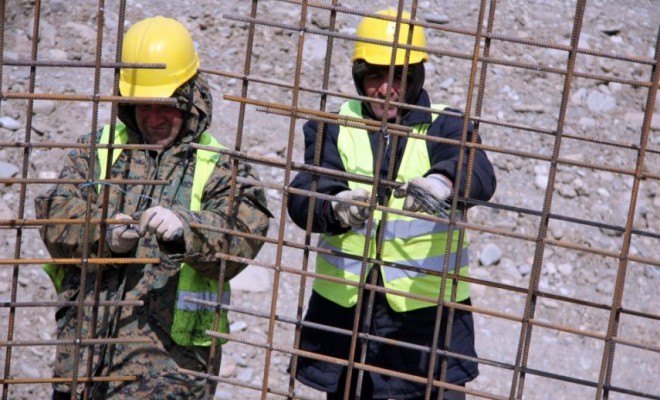 The Municipal Development Fund of Georgia is implementing rehabilitation works for Tiriponi and Saltvisi irrigation scheme in Shida Kartli Region, which is located in the conflict zone. The Project is funded by the USAID and envisages improvement of about 20 thousand hectares of irrigation system for 30 villages, which have suffered as result of the year 2008 war with Russia.  Approximately hundred local inhabitants will be employed at the project site.


The project in the conflict zone is under implementation by the Georgian construction company “Mshenebeli 80”. Main canals of  Saltvisi and Tiriponi irrigations schemes are laid along the border of the occupied territory; there were unexploded charges discovered in the main canals of above-mentioned villages, therefore special safety measures are required in this area.  The mine clearing service “Delta” is operating on-site.

Before the year 2008 conflict, Tiriponi irrigation scheme was utilized by major part of the Gori Municipality villages, but following the August war the de facto regime has blocked the canal.   The villages were left without water and could not grow crops any more.

Head works of Tiriponi irrigation scheme is located in the territory of the de facto republic, the system passes through Gori District villages and ends by the Ossetian Villages Orchosani and Tsinagara.  The canal, which stood idle for years and was filled up with stone and ballast, was cleaned as part of rehabilitation works.

After completion of rehabilitation works, irrigation problem will be fully solved.

To date, as a result of rehabilitation works, the 16 km long canal of Saltvisi and Tiriponi is already cleaned up, thus upon commencement of irrigation season in the month of May, the population will reap first results of works.