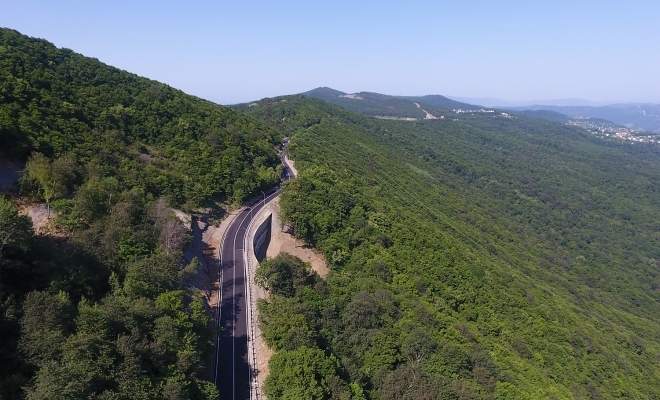 Tskneti-Samadlo and Tskneti-Akhaldaba Road represents one of the most complicated section. In the process of rehabilitation of the referenced road there were involved the foreign experts from Germany, Turkey, Austria and Russia. Because of difficulty of the road, safety standards were considered as much as possible in the process of construction. There were arranged the special meshes to stop inertial movement of rocks at high speed. This method had never been applied in Georgia before and has been brought from Europe at this time. There were installed the early warning systems, providing transferring of signal to the roadway gates, installed at the entrance and exit of the road – upon even an insignificant movement of the rock, resulting in its automatic closing.  In the process of construction there was studied the safety factor of  land slipped slope, considering seismic impacts for 8 grade and hydrogeological pressures. The suspicious zones identified as a result of survey were drilled and the rocks were strengthened by means of anchoring.

The project has been implemented with financial support from EIB and its cost exceeds GEL 29 million. Rehabilitation of this road is of the highest significance for the locals as well as for the holiday makers.