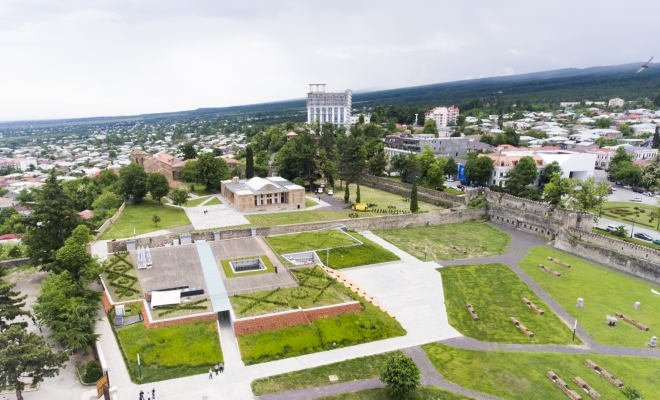 Rehabilitation of Batoni Castle (Museum and the site) in Telavi City has been finalized. The Prime Minister of Georgia Giorgi Kvirikashvili has opened the renovated Batoni Museum.  The attendants of the opening ceremony were the Minister of Regional Development and Infrastructure of Georgia (MRDI) Maia Tskitishvili, Minister of Culture and Sports Mikheil Giorgadze, World Bank (WB) Representative Sarah G. Michael, Director of the Municipal Development Fund (MDF) Gagi Buadze, Governor-Authorized Representative to Kakheti Irakli Kadagishvili and other officials.

Batoni Museum has been rehabilitated by MDF of the MRDI within the Regional Development Project with financial support from the WB and the Government of Georgia. The Contractor for the rehabilitation works was Georgian Company "Java" Ltd.

The objective of the project is creation of museum and exhibition spaces in compliance with international standards and supporting tourism development in Kakheti Region. The referenced project was developed in agreement with the National Agency for Cultural Heritage Preservation of Georgia (NACHP).

The new museum was constructed and the site accomplishment works were executed on the side of the Museum and of Batoni Palace within the project.

There was arranged the main exhibition hall at the Museum, throughout the space of which there are to be exhibited archaeological findings and ethnographic materials, as well as samples of fighting equipment and armament, manuscripts and rare publications. There was arranged also the temporal exhibition space and the Gallery, aimed at exhibiting the art collection of Ketevan Iashvili, comprising of lots of examples of west European artists dated XVII-XVIII-XIX centuries, along with samples of paintings of XIX-XX century Russian school representatives and the ones by  Georgian artists and of representatives of different countries dated XIX –XX centuries.

The Museum owns an extremely rich collection, consisting of 65 000 exhibits.

Throughout the Museum there was arranged the indoor and outdoor café, amphitheater and an office area for Telavi Historical Museum staffers. There was installed the heating-cooling-ventilation system which complies with international standards.

The project cost made up GEL 10,9 million.

Along with the Museum construction, the Museum has been equipped with the required inventory (power and computer equipment, exposition display cases, office furniture). Batoni Museum is under management of Telavi Historical Museum.

Restoration of Batoni Palace of Telavi City was finalized by MDF in October 2016. The comprehensive restoration works were conducted at King Erekle Palace within the project.

The whole complex of Batoni Castle represents the cultural-educational space, throughout which the new museum and the royal palace as well as each component of the Monument, will provide full availability of the information for visitors, creating at that possibility for the visitors to perceive the cultural values in an appropriate and new manner.

The rehabilitated Museum will increase the flow of visitors to Batoni Castle Complex and respectively will assist to cultural tourism development in Kakheti Region. In addition to maintaining the monument for future generations, involvement of local population in the field of visitors service management, will also be improved.