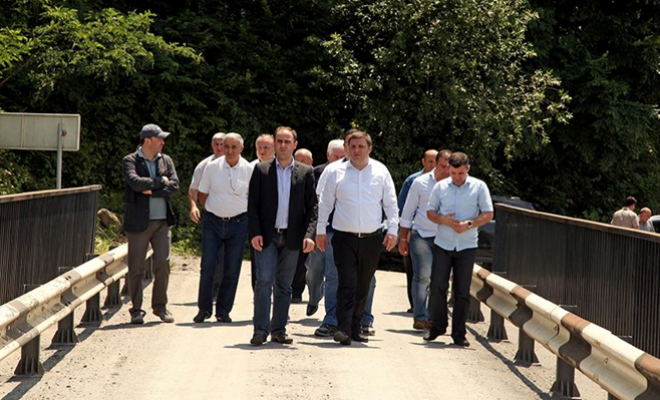 In Tsageri Municipality Village Lasuria an opening was held for one newly constructed and one rehabilitated bridges on the river Tskhenistskali.  The opening was attended by Mr. Davit Narmania -  the Minster of Regional Development and Infrastructure of Georgia, Mr. Elguja Khokrishvili – Executive Director of the Municipal Development Fund of Georgia and the representatives of the local Municipality.  Rehabilitation of the bridge on the river Tskhenistskali in the village Lasuria was implemented by the Municipal Development Fund of Georgia with the funding of the World Bank.  Total project cost amounts to GEL 3,081,463.25.

Rehabilitation works were launched on September 16, 2012 and were completed in May of the current year.   The works were executed by the Georgian Company “Mamisoni” LTD, and there were 72 people in all employed in course of project implementation.  As a result of Lasuria Bridge rehabilitation, 8 villages of Tsageri Municipality got access to the Municipal Center.   During river Tskhenistskali inundation periods, the above-mentioned villages were getting detached from the outer world and village inhabitants were constrained to use detour roads.     After project completion the population of the villages Lasuria, Makhashi, Dekhvi, Lesindi, Aghvi, Kveda Aghvi, Kenashi, Sanorchi will be connected to Tsageri Municipality and Kutaisi-Alpana-Ambrolauri national importance road via the shortest route.     Duration of rehabilitation works was 8-months. Under the project the existing bridge was extended by two spans (42 meters), total length of the bridge is   147 meters. A new 18 meter bridge was also constructed over the Sakhravela ravine. Bank protection works were implemented and the concrete embankment was arranged as part of rehabilitation works.