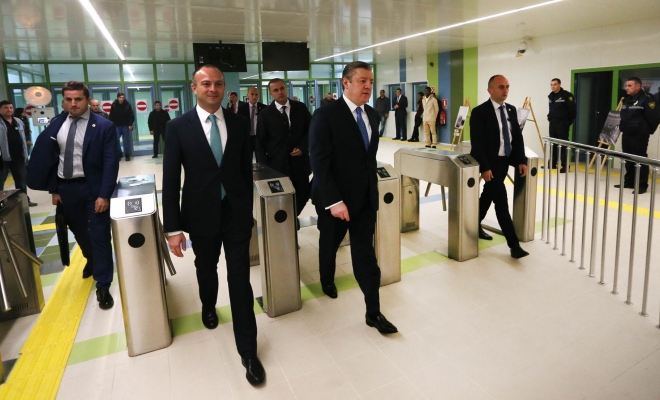 From now on, the new metro station “University” will serve inhabitants and visitors of the capital.  The 23-rd metro station was inaugurated by Giorgi Kvirikashvili – Prime Minister of Georgia  and Zurab Alavidze -  Minister of Regional Development and Infrastructure of Georgia.

The Minister congratulated the audience, local residents and guests on opening of the new metro station  and expressed his gratitude to all those people, including civil engineers, who have contributed to successful completion of this project.

“This very day, the new, up-to-date 23-rd metro station „State University” will supplement the existing 22 stations operating in Tbilisi; construction of the named station was suspended for a 21 year period. Commissioning of the new station will allow of delivering rapid  and  safe conveyance services  to more than   15 000 locals and guests of the city, which is vitally important for releasing the existing congested traffic flow and development of the urban transport infrastructure in the capital city.’’- declared Zurab Alavidze.

The project backed by the Asian Development Bank was implemented by the Municipal Development Fund of Georgia and its cost averaged GEL 84 million. Civil works were carried out by Cobra Assignia - one of the most renowned Spanish companies, which has completed numerous large scale projects worldwide.

The Prime-Minster together with the Minster of Regional Development and Infrastructure, other authorities and guests took the first train departing from the new station.

Members of the Government of Georgia, representatives of the Diplomatic Corps and other officials were also attending the event.